This blog is turning out to be a travelogue. Will have to change it. With New Year close on the heels, think will add it to the empty list of New Year resolutions, though what happens to

Anyway this trip was the third attempt to complete full length of the jinxed Mullayanagiri – Kemmangundi trek. Having balked at previous attempts, Attempt #1 and Attempt #2 due to various reasons, was excited about this trek. Dec 14 was fixed as the date for the quest. The plan died in few days when people in trekking gang were unable to join due to different reason and got a life when Rakesh Balakrishnan kindled the thought, why not just the two of us with just two days to go for the weekend. It was a great idea,  but just two of us trekking in reserved forest and camping nowhere near civilization did send shivers down the spine. Though we were excited and enthusiastic, the real test would be when we start walking. The plan looked exciting, achievable and foolish as well. The hopes died, when BMC from where we usually rent our tents said tents were not available during that weekend. But we did managed to arrange from Mars Adventures. We purchased sleeping bags from Decathlon, since it looked a better option than renting them for every trip. Bus tickets to chickmagalur were never a problem, and soon we saw ourselves packing.

Reached chickmagalur at around 5.00AM, checked into a hotel and got ready for the trip at 8.00AM. Made sure to open the tent and pack it in our bags. Carrying tent in hand is laborious and makes the ascent difficult. There is a single bus service from chickmagalur to Sarpadhari, the trek starting point. Bus name is S.M.S but they start at their own sweet time when they feel it is crowded enough. So if you want to start the trek early, better to choose cab/auto. We went in an auto who charged Rs. 250. The trek from Sarpadhari to Bababudangiri/Galikere can be split into four parts 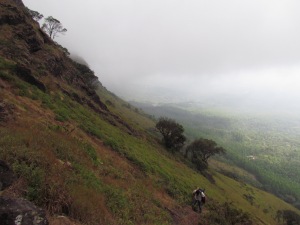 Our aim was to camp at Galikere and trek to Kemmangundi the next day. Knew at every part, it will be a race against time. Started the trek at 9.15Am. It was a quick climb (by our standards) to the peak and we reached the peak before 11.00AM. Mullayanagiri was awesome as usual. A little misty even after monsoon. The grasses were slowly drying after the monsoon but was green enough to make a grand sight. We spent a little time at the peak and started for part 2 of the trek. Finding the path to attigundi post from mullayangiri peak was tough. But from the previous attempt i knew it existed somewhere behind the temple. So after a little search were able to locate it. Once we find the path, the walk to Attigundi checkpost is easy, so we did it without taking many breaks. Had a quick lunch @ Attigundi checkpost. Everything was going according to plan 🙂 Or looked like.

The twist waited when we were about to start the third part of the trek. It was Dattareya Jeyanthi on Dec 15, 2013 and due to security reasons the knife edge the direct path which goes through the gorge(knife’s path) to the BSNL tower was closed. The police advised us to go via the road. We followed the road for a while, searched for a path and decided to the walk parallel to the original route and join the path from knife edge at some point. There was no path, so had to venture into the bushes and shrubs and create our own path chasing away the small snakes (exaggerated, found only one)  that were resting. The next hour was dedicated to this. The good part was we were able to do it and get back to the original path, and the bad part was we had lost a good amount of time. And we reached the BSNL tower by 5.00PM.

Any trek will involve meeting a local who will claim the place we intend to go is not near as we think, but it is +x KM. Such meeting happened in the BSNL tower. We were under the impression that Galikere is around 4-5KM from BSNL 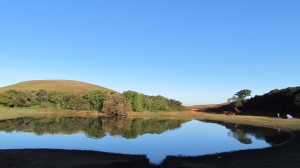 tower, but the guy there claimed it is 8KM. We knew 8KM after 5PM will involve trekking in the dark. Anyway learnt next day that Galikere is 5KM from the place and the route is not difficult either. The guy also showed us Manikyadhara, that is very close to the tower, where we can camp. Mr. Prasad, the forest officer we met during the last visit had mentioned that it is good for camping and we get food/fish fry there. I remembered the place name and the office name because of the mention of fish fry. Manikyadhara also has a small waterfalls which attracts tourists. Anyway all shops were closed due to Dattareya Jeyanthi and there were no jeeps as well. Otherwise it is possible to rent a jeep from there to Galikere. With were very little options left we decided to camp near a pond in Manikyadhara. The place was pretty and peaceful. There were no rough winds which left us in absolute silence. Still was able to manage only a disturbed sleep due to the cold weather and possibly due to the uneasy tranquility that prevailed.

.30AM to the sound of birds. In particular there was a bird that whistled/sang beautifully. Was not able to sight it. Spent sometime roaming and exploring the area around the tent, more importantly waiting for the sun to heat up a little, so the bath in Manikyadhara falls will be enjoyable. Though Manikyadhara falls did not have much water to offer, the bath was exhilarating. Camping at Manikyadhara meant 5KM gets added to the Day 2 trek to Kemmangundi, making it more than 20KM and impossible. So we called it a day and walked towards Bababudangiri. From the “My Tracks” android app the total distance we covered was around 13KM on the first day and 3KM walk to bababudangiri on the second day. The SMS bus service was the only option available. Boarded the bus at  11.15AM which started at 12.45PM and reached chickmagalur at the right time to catch the 2PM bus back to bangalore 🙂

Though the weather during december was good and helped in trekking without drizzle and leeches, it is during the monsoon or just after the end of monsoon, Mullayanagiri is at its supreme grandeur. The thought beckons attempt #4 for the full 30+ KM trek, time will answer whether it will happen.

After two year, around the same time, we were there again with the same goal, to complete the Mullayanagiri – Bababudangiri – Kemmangundi trek. Started the planning with 6 people and the count suddenly soar to 17 in the middle with Eric anna and his old HCL team pitching in, finally we were 15. Tickets booked, tents arranged from BMC, foods stuffed in backpacks we were ready on friday night. Weather report said, 30% chance of storm on friday, saturday and Sunday, we decided to try our luck on the remaining 70% –  optimism 🙂 Few stuffs like Western ghats, south west monsoon, windward side, lee ward side which i had learnt in geography lingered in my mind for a while, but the trip was on.

Reached chickmagalur @ 4.45AM, checked into a small hotel (selection lodge), paid 850 for two rooms and we were ready for the trek at around 7.30AM. Booked a jeep for 700Rs to drop us @ Sarpadhari, the starting point of the trek. Additional Info: there is also private bus available next to chickmagalur bus stand, and it starts at 8.00AM.

Start of the trek: After around an hour journey reached Sarpadhari and around 8.30AM. As we had expected, he was waiting for us. The moment we stepped out of the jeep, it rained 🙂 Undetterred we started the Mullayanagiri ascent from Sarpadhari (sarpa – snake, dhari – path). The rain was brief but enough to make the path slippery. The ascent turned out to be pretty tough and drained a lot of energy. Remember the sleeping bags, tents and food items which added to the weight. Thanks to the rain, We were soon engulfed in mist. Beautiful green grass, misty white backgroun, cool breeze and soft drizzle. What else do you need. It was fantastic. Better felt, than explained.

Anyway the trek to the Mullayanagiri peak sucked a lot of time. Fortunate we didn’t have leeches to suck blood too. Atleast we didn’t care about them. At around 11.45 to 12.00AM we reached the peak. Explored the two caves a bit, recharged with a bit of snacks and started the next part. The walk to BSNL tower.

The Confusion: From mullayanagir, finding the path that would lead to BB Hills became a tough task. Tried my phone GPS, explored a few paths it didn’t help. Map reader, Sai tried with his compass and map, but we were stuck for a while. Discussions started, should we continue was the question ? It just reminded me about the last trip to Kemmangundi, where we climbed a peak, and when the discussion started and the trek was aborted. Thanks to Mani(HCL), he found a path and started exploring. I ran behind him. We explored for a while, and walked a few KMs and found there does exist a neat and clean path. Met a few BMC guys, who were stuck too. Told them about the path and came back to our gang. And the trek started again.

The Trek Continues: So we started the trek again at around 12.55PM. We started walking towards Attigundi. The path was neat and clean, and the trek was not at all difficult, when compared to the Mullayanagiri ascent from Sarpadhari. Enchanting views through out the path. The path continued to play hide and seek with the help of mist, but it was not tough to stay on the path. Around 1.30PM we were reminded about the Sun, and that gave us the opportunity to see the beautiful ridge in the front. The ridge is the next part to be covered to reach BB Hills. After around 30 minutes we reached the police checkpost, ending the first part of trek and the ridge in the front to be covered after lunch. Time was around 2.20PM

The Interruption: We were having lunch, when a forest officer met us with a smile. We had met him at Mullayanagiri peak, where he had given us some suggestions. Interacting we came to know that, we still have around 4hrs to cover (if we walked fast). And if it rains we would be stranded in the ridge, where we cannot camp too. So he suggested going to BB hills and camping there or booking a room there. With that he left, and rain arrived. So we decided to try our luck at BB hills. With the help of few forest gaurds, booked a jeep to BB hills. The forest gaurds were very very helpful. The jeep journey was fun, as i got an opportunity to travel, standing on the jeep steps and hanging to the back of the jeep. A wise decision, as the torrential rain would have wrecked havoc, if we had continued with the trek.

End of Trek: When we reached BB Hills, it was raining cats and dogs. The option of camping out, was ruled out. After some heavy lunch at a local hotel, looked for a room. Rooms were horrible. So decided to get back to chickmagalur to decide. Going back to Kemmangundi again next day, didn’t sound like a good option, so booked KSRTC tickets to bangalore. It was at chickmagalur i discovered a leech has managed to suck good amount of my blood. Can only wonder at the way they manage to suck blood without pain.

Though the trek ended, it was satisfactory when compared to the previous one. But still the place continues to amaze me. Should plan for the next trek to this place soon after the monsoon ends.